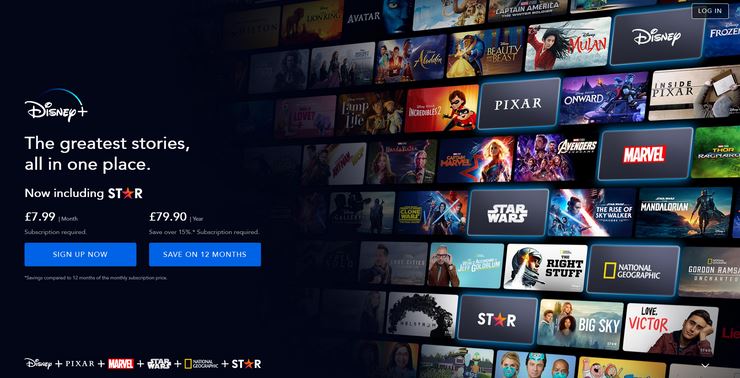 It didn’t occur to us that Disney + could get that amount of subscribers in just a year and six months, even with the competition from rival streaming services. Disney+ now has over 100 million subscribers.

It still doesn’t end there, Disney even more ambitious plans for the next three years. So, how did Disney+ reach this milestone in such a short amount of time? And what’s it position in a fiercely competitive pace?

From Day One to Present: Disney + History

Disney+ officially launched in November 2019. The platform was initially rolled out in the US and Canada, as well as the Netherlands.

A week after, Disney+ extended its reach to Australia, New Zealand, and Puerto Rico.

In 2020 the company to go into the streaming market full. By March that year, the platform rolled out in various European markets. These included the UK, Germany, Switzerland, and Italy.

Ever since, the platform has expanded throughout North and Latin America, Western Europe, and Oceania. Customers in parts of Asia, including South Korea and Japan, can also use the service.

How Come Disney + Grew So Fast?

We have narrowed it down to few of these reasons.

We all know Disney is a globally recognized platform, so it’s no news that its streaming service could have that amount of likes by users. As of March 2021, Finbox tracks the company’s market capital at well over $300 billion.

During the COVID-19 pandemic, the company received one of the biggest contributions to it’s platform. Because we had to stay home during that time a lot of us decided to keep ourselves busy with Disney+.

The service has cost just $6.99 per month before Disney+ increased its prices in March 2021, and it costs even less in countries like India and Indonesia. On like it’s rival, Netflix comparatively costs $8.99 per month for the basic version and $13.99 for standard.

What Does The Future Hold for Disney+

From analysis, Disney originally expected Disney+ to hit between 60 and 90 million subscribers by 2024. However, it has upped its goal to 300-350 million.

It feels like Disney + is going to give Netflix a run for their money. Netflix’s 200 million subscriber count was achievable within a decade.

Some might perceive Disney+’s rising prices as being a decisive factor. However, the numbers aren’t huge; US customers now pay $7.99 per month, while UK users pay £7.99 and Europeans €8.99.

Should You Give Disney + A Try

Despite the price increase, Disney+ still offers good value for money. The streaming service has a solid 2021 lineup, including titles like Loki and Monsters at Work.

Disney+ has enjoyed significant growth in little time. While it remains to be seen if it’ll reach its lofty new 2024 goals, the platform is in a great position to continue this.

You can join the winning team and create to Disney today to get the latest movies, and series today, and with the best qualities too.