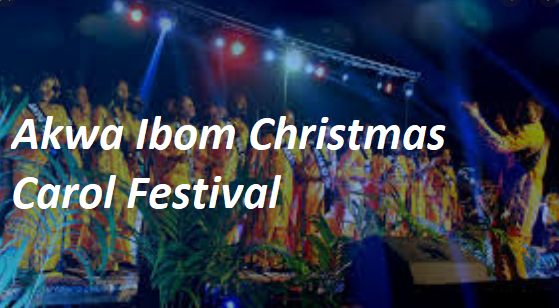 The Akwa Ibom Christmas Carols Festival is a large gathering of carol singers in Nigeria. A concert featuring 25,272 carol singers at the Akwa Ibom Stadium, Uyo, Akwa Ibom, Nigeria, with Guinness World Records representatives in attendance, was officially certified as the largest such gathering in the world by Guinness World Records on December 13, 2014, against a former record of 15,674 carol singers which was achieved the previous year (December 15, 2013) by a group called CENTI in Bogotá, Colombia.

The Akwa Ibom Christmas Carols Festival is a glittering carnival of songs of praise at Christmas, hosted by the Akwa Ibom State Government in worship to the Almighty God and to foster unity among Akwa Ibom people. It is an annual evening celebration where thousands of voices are raised in worship to the Almighty God. This year is slated to hold on Friday, December 20th, 2019, 6pm at the magnificent 55,000-sq. metre Ibom Hall Arena, IBB Avenue in Uyo city and with a 42,000-seat capacity, AKCAROLSFEST returns with the theme: “ONLY GOD” and will feature a large group of carol singers and some of the best local and international gospel artistes of our time.

This is the 12th edition of the Akwa Ibom Christmas Carols Festiva, this festival will be shown live on global broadcast media such as DSTV, GOTV, AIT, Channels TV, and AKBC.